Rising commodity prices provided the base for a recovery in the Australian share market in the month of March.  The All-Ordinaries index closed the month 6.4% higher at 7,232 points, and has now recovered all losses from earlier in the year.

The Reserve Bank of Australia (RBA) kept the official Cash Rate at 0.1% per annum in March, and while no change is expected at next week’s RBA’s board meeting, bond markets have priced-in interest rate rises (with many economists now seeing the RBA making two rises to the Cash Rate this year).

Global share market results were generally stronger in March, with the United States Dow Jones index gaining by 2.3%, the London FTSE gaining by 0.8%, the Japan Nikkei 225 gaining by 4.9% and the Hong Kong Hang Seng Index once again retreated in value, falling by 3.2% for the month.

With the ongoing war in the Ukraine, market attention was on the inflationary effects of war – added to the news of a headline inflation reading in the United States of 7.9% for the year to February.  As a result of this level of inflation, bond yields have spiked. 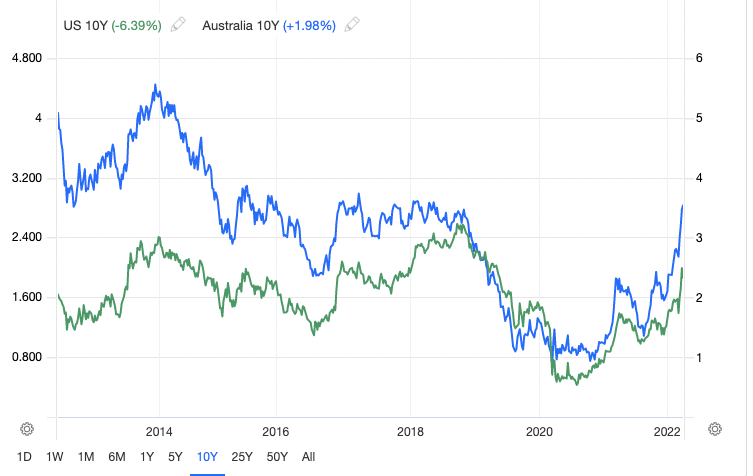 As illustrated in the above chart, both the Australian and United States government bond yields have risen dramatically this year – with yields now sitting at pre-pandemic levels.

When we add to the mix the Australian government announcing in this week’s Federal Budget that it will be pumping more stimulus to offset the inflationary effects of the Ukraine war (lowering fuel costs for 6 months for instance), it is somewhat staggering to think that bond markets have priced-in United States inflation rates in Australia.

It is uncharted territory as to how markets will react to interest rate rises from these record low interest rates and government stimulus (which remarkably is still occurring). However, to my way of thinking, Australian bond yields may have risen too far over recent weeks.

This article is general information only and is not intended to be a recommendation.  We strongly recommend you seek advice from your financial adviser as to whether this information is appropriate to your needs, financial situation and investment objectives.