Global shares were also negative in June with the US Dow Jones Index down 2.2%, the London FTSE down 6.6%, the Hong Kong Hang Seng Index down 4.3% and the Japan Nikkei 225 Index down 1.6%. The recent sell-off in global share markets has been fuelled by the re-emergence of the sovereign debt crisis in Greece.

What Has Occurred In Greece?

In response to these demands, the Greek government announced that they will hold a national referendum on the 5th of July asking their citizens whether Greece should agree to the austerity measures proposed by international creditors.  Meanwhile a bank holiday was announced in Greece on Monday the 29th of June to stem the flow of capital exiting the banks, with the likelihood that banks will be closed until the referendum and ATM withdrawals are limited to 60 euros per day.

Negotiations are set to continue between Greece and creditors, however time is running out as Greece was scheduled to make a debt repayment to the IMF on the 30th June (European time) and consequently has defaulted on its debt obligations.

Markets have reacted adversely to these developments, with pullbacks recorded across most international equity markets as uncertainty looms as to what Greece’s long-term future will look like within the Eurozone. This has been the trend with each round of debt negotiations, however with each round of negotiations the stakes appear to become greater as Greece’s economy sees no sign of recovery.

What Are The Implications For Investors?

It is important to recognise that the Greek economy represents approximately 0.39% of global GDP, which makes it a relatively minor player on the world economic stage.  However, the main risk that investors should be concerned with is a scenario where Greece defaults on its debt or eventually exits the Euro, and instability spreads to other European countries.

There are also geopolitical considerations, with Europe facing several challenges including a Russia looking to expand its sphere of influence in Europe and the rise of more extreme political parties across the political spectrum.

Irrespective of the outcome, market volatility spikes during periods of uncertainty and it is probable that uncertainty relating to the situation in Greece will persist until there is clarity on whether additional funds will be made available to Greece (in order to avoid default and longer term Greece’s future membership in the Eurozone).

Markets have been focused recently on the 1.6 billion euro loan repayment to the IMF and the 7.2 billion euro bailout loan that needs to be approved to avoid default.  However, there will need to be a third large bailout program negotiated later this year totalling around 50 billion euros due to further Greece debt repayments due (as shown in the chart below). 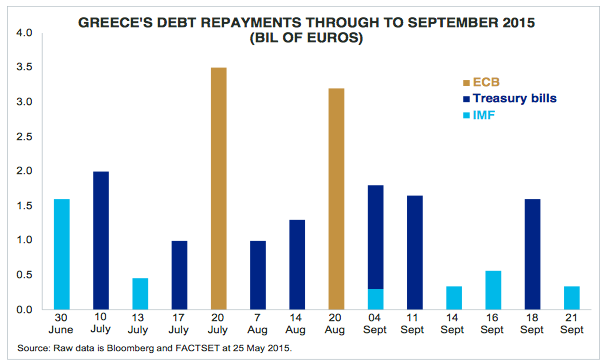 In the most recent newsletters I have noted that we are likely to see periods of heightened market volatility due to a variety of reasons (including the potential unwinding of unconventional monetary policies such as quantitative easing, as well as volatility spikes attributed to events such as the current situation in Greece).

The timing and frequency of such events is difficult to predict, however from a investors portfolio perspective we need to look no further to 2011 whereby equity markets declined due to the then Greek sovereign debt crisis.  While equity markets were negative during the 2011 calendar year, well diversified portfolios managed to avoid most (if not all) of the downturn. Furthermore, once the Greek debt was renegotiated a period of stellar equity market returns followed.

The Reserve Bank of Australia kept the official cash rate on hold in June, with the RBA cash rate remaining at 2.00% per annum. While many commentators now expect this to be the low point of this easing cycle, developments in Europe (and the flow on effects for the global economy) may be a trigger for the RBA to continue with its rate-easing stance.