The Australian share market bounced back from a disappointing June to gain 4.2% in the month of July, with the All Ordinaries Index closing at 5,681.7 points. The positive result came as negotiations between the Greek government, the European Commission and the International Monetary Fund advanced.

Global shares were also generally positive in July with the US Dow Jones Index gaining 0.4% the London FTSE gaining 2.7%, the Japan Nikkei 225 Index gaining 1.7% and the Hong Kong Hang Seng Index falling 6.1% (largely as a result of the increased volatility in the Chinese stock market).

Media outlets were also reporting in the month that the median price of a house in Sydney reached $1 million. This news sparked some interesting conversation amongst some of my friends during the week. There were polarising views on the “where to” for the Sydney property market from here.

The most outspoken of all views was from a local real estate agent, who claimed “property values never fall”. While Sydney property has been a solid long-term investment, this statement is not factually correct.

The chart below shows annual percentage movements in median house prices for various northern Sydney Local Government Areas (LGA). While I have focussed only on a select few suburbs in northern Sydney (as this was the basis of our group discussion), the same could be said for most capital city suburbs. 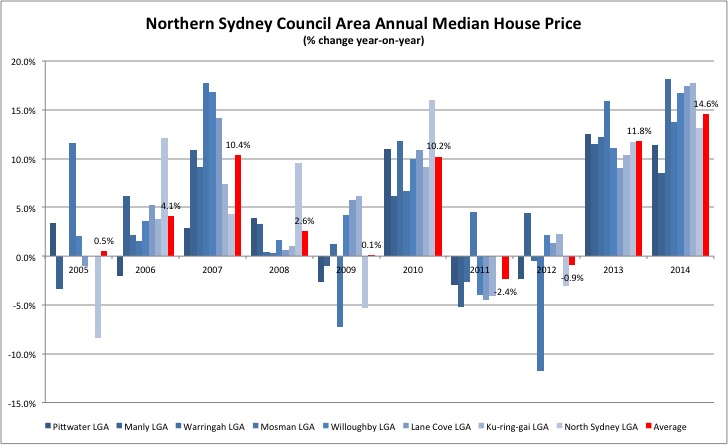 What is remarkable from the above chart is the variance in returns between suburbs – which are all within a 30-kilometre radius of each other! Suffice to say that there have been periods whereby property values have fallen (and this generally follows a period of rapid growth).

While long-term the returns are solid, try telling someone who bought in Mosman in 2009 or 2012 that “property values never fall” only to see the median values of houses fall by 7.2% in 2009 and 11.8% in 2012. Provided those buyers in 2009 and 2012 held onto their houses for more than 5 years they would have been fine (easier said than done if you were retrenched during the Global Financial Crisis).

To form a balanced outlook on future property values, you must also consider expectations of future interest rates (which most would acknowledge will increase at some stage from the current record low levels). The chart below shows the historical movement in the Sydney median house price compared to the RBA Cash Rate. 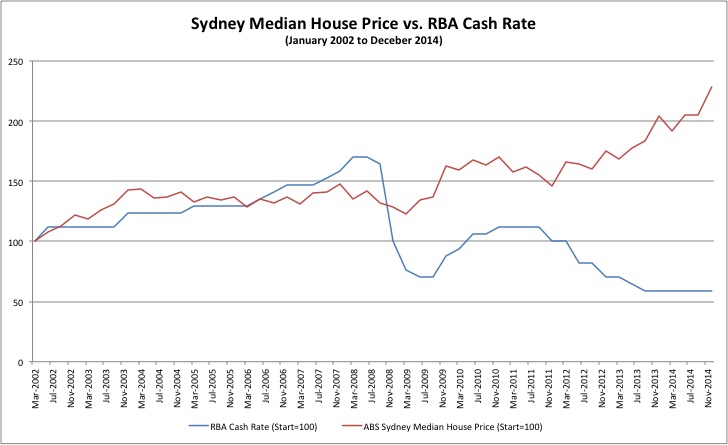 As shown in the above chart, since 2002 the median house price more than doubled. In contrast, the RBA Cash Rate has more than halved (when including the 0.50% in rate cuts in 2015). What is also clear from the above chart is that there is a strong relationship between flat (or declining) house prices when the RBA is increasing interest rates. Conversely, there is a strong relationship between rising house prices when the RBA is cutting interest rates. This is generally true of all capital cities.

With the RBA Cash Rate at record low level of 2.00% per annum, I certainly don’t expect the RBA Cash Rate to be at 1.00% per annum in 12 years time. Therefore, my expectations of property values are that growth rates will moderate in a similar way that they moderated from 2003 to 2009 (noting there was no growth in the Sydney median house price over this 6 year period).

When the RBA eventually decides to increases interest rates, they will need to be very careful not to send property values into decline. On the basis that the average RBA Cash Rate since 2002 is 4.53% per annum, if the RBA looks to increase interest rates back to their long-term average quickly, then I would not be surprised to see a period whereby property values fell.

On the basis that the average wage in Sydney is currently around $80,000 per annum, it’s hard to see where the next wave of property price growth will come from. Personally, I think to mount a view that property values will continue to grow at their historical rates of growth you need to be confident in a low interest rate environment remaining and strong wage growth in the future.

The RBA will meet again on Tuesday this week, with expectations for the official cash rate to remain on hold at 2.00% per annum. The Australian Dollar has fell by 4.8% in July, with one Australian Dollar currently buying US73.07 cents.