The continued spread of Coronavirus has resulted in further carnage across global investment markets, with the magnitude of market falls not seen since the 1987 stock market correction.

The Reserve Bank of Australia (RBA) took an extraordinary move of cutting the official Cash Rate to 0.25% per annum outside of an RBA board meeting.  The Australian Government 10-year bond rate is now currently 0.76% per annum (a 56% fall in the rate over the last year), indicative of expectations that low rates are to remain for a long while.

Global share markets all recorded significant falls in the month of March, with the United States Dow Jones index falling by 13.7%, the London FTSE falling by 13.8%, the Japan Nikkei 225 falling by 10.5% and the Hong Kong Hang Seng falling by 9.7%.

The above falls are significant by any historical measure.  What perhaps sets this correction apart is the speed and cause of the fall.  Given it is related to a health issue, if the health issue can be resolved (either via a vaccine and/or medicine to treat the symptoms) it is arguable that any recovery can be swift.

The key risk is the collateral damage from global economies "shutting down" to stop the spread of the virus, and the impact this has on households’ long-term financial position.

In my view, the key to avoiding a deep recession will be government fiscal stimulus.  We have seen this week in Australia that wage subsidies have been provided, and there are arguments the government could even go further in terms of the amount paid to employers to then retain their employees.

The chart below shows the “payback period” in terms of the number of months it will take the government to recoup in collected taxes a month of “full-pay” based on varying levels of income. 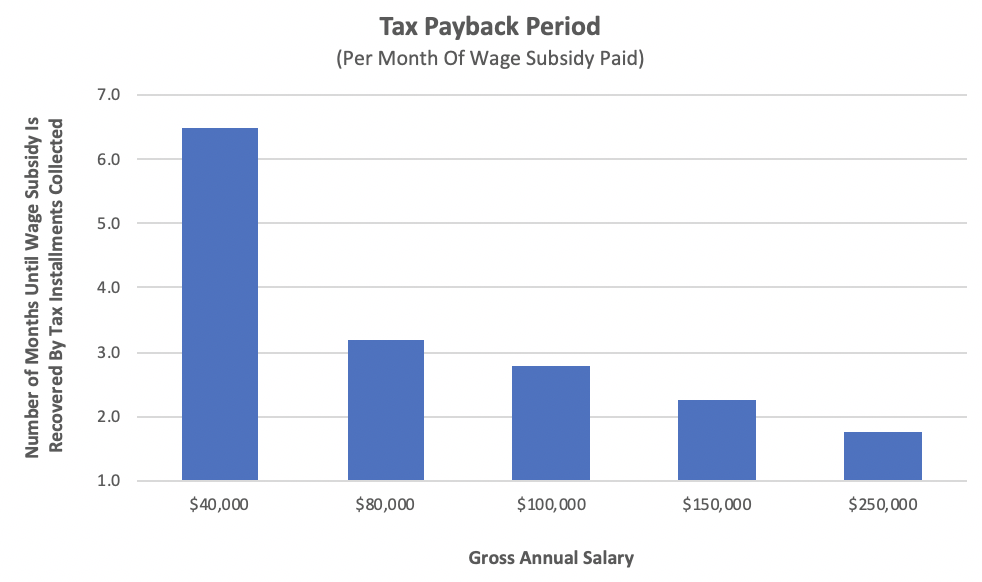 Surely, if a full shut-down of the economy can control the spread of the virus and enable normal economic activity to resume, then greater short-term wage subsidies warrant further debate.

After-all, if full wage subsidies result in avoiding either a doubling or tripling of the unemployment rate (and the associated long-term welfare and economic cost of this) then it is a smart investment for the government to increase wage subsidies.  This may only need to be for 4 to 6 weeks to provide time to get the spread of the virus under control and avoid a complete collapse in the health system (as has been seen in Italy and Spain) – while not risking long-term carnage to the economy.